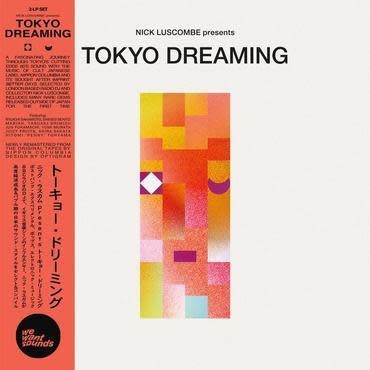 Tokyo Dreaming is a superb selection picked from the highly collectible Nippon Columbia label and its Better Days sub-label. Wewantsounds have teamed up with journalist and Japanese music expert Nick Luscombe. The selection mixes electro, synth-pop, funk, and ambient and includes many sought-after rarities and hidden gems which have never been released outside of Japan and the set has been newly remastered by Nippon Columbia. Nippon Columbia, one of Japan's oldest music labels is also one of its most collectible thanks to its sub-label Better Days which, in the late '70s, became a hotbed for Tokyo's new generation of pop artists eager to experiment with ambient, electro, and funk. Armed with a string of new Japanese-made synthesizers and drum machines that would soon take the world by storm, they made cutting-edge music, which has since become highly sought-after by a new generation of Japanese music lovers. Nick Luscombe, who has long been a leading advocate of Japanese music from this era, has handpicked a selection of some of the sharpest music released on these labels at the time. Tokyo Dreaming starts with The End of Asia by Ryuichi Sakamoto from his 1978 ground-breaking debut Thousand Knives Of.... The track became a staple of Sakamoto and Yellow Magic Orchestra's live shows and was even re-recorded by the group for their 1980 album X Multiplies. The track is followed by Mariah's cult Armenian folk flavoured synth pop classic Shinzo No Tobira (1983). Chika Asamoto's Self Control (1988) and Jun Fukamachi's Treasure Hunter (1985) are perfect songs in the synth-pop canon, while Yumi Murata's rendition of Akiko Yano's Watashi No Bus and Hitomi "Penny" Tohyama's Rainy Driver both from 1981, move closer towards the slicker, funkier sound of city pop. Tokyo Dreaming superbly showcases the breadth of '80s Japanese music and the way electro pop was a playing ground for musicians to experiment with many styles, as showcased by Akira Sakata's dub-infused Room from 1980, Kazumi Watanabe's discoid Tokyo Joe (1980) and Juicy Fruits' techno pop song Jenie Gets Angry. The selection flows effortlessly between many shades of synth and ends with two cult classics in the form of Yasuaki Shimizu's Semi Tori No Hi and Shigeo Sekito's ambient-jazz masterpiece The Word II from his highly sought-after album Kareinaru Electone (The Word) Vol.2 (1975). Tokyo Dreaming showcases the groundbreaking sounds of a city turned giant sonic lab which was restlessly inventing the music of the future. Album designed by famed London-based designer Optigram. Also features Yumi Seino, Kyoko Furuya, Kazue Itoh, Haruo Chikada and Vibra-Tones, and Colored Music.