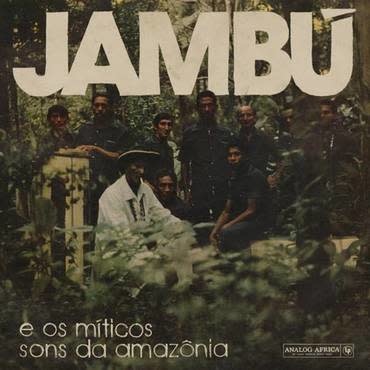 The history of Jambú e Os Míticos Sons Da Amazônia is the history of an entire city in its full glory. With bustling night clubs providing the best sound systems and erotic live shows, gossip about the whereabouts of legendary bands, singers turned into movie stars, supreme craftiness, and the creativity of a class of musicians that didn’t hesitate to take a gamble, Jambu is an exhilarating, cinematic ride into the beauty and heart of what makes Para‘s little corner of the Amazon tick. The city of Belém, in the Northern state of Para in Brazil, has long been a hotbed of culture and musical innovation. Enveloped by the mystical wonder of the Amazonian forest and overlooking the vastness of the Atlantic Ocean, Belém consists of a diverse culture as vibrant and broad as the Amazon itself. Amerindians, Europeans, Africans - and the myriad combinations between these people - would mingle, and ingeniously pioneer musical genres such as Carimbó, Samba-De-Cacete, Siriá, Bois-Bumbás and bambiá . It boasted a radio station, a recording studio, a music label and had a deep roster of popular artists across the carimbe, siri, bolero and Brega genres. Another important aspect in understanding how the musical tradition spread in Belem, are the aparelhagem sonora: the sound system culture of Para. Beginning as simple gramophones connected to loudspeakers tied to light posts or trees, these sound systems livened up neighbourhood parties and family gatherings. The equipment evolved from amateur models into sophisticated versions, perfected over time through the wisdom of handymen. Today’s aparelhagens draw immense crowds, packing clubs with thousands of revelers in Belém’s peripheral neighbourhoods or inland towns in Para. The music and tales found in Jambu are stories of resilience, triumph against all odds, and, most importantly, of a city in the borders of the Amazon who has always known how to throw a damn good party.