Screamin' Jay Hawkins - What That Is!

Home / Screamin' Jay Hawkins - What That Is!

Recorded in 1969, years following his big hits, Screamin’ Jay Hawkins’ third album What That Is! showcases Hawkins in one of his most rowdy and compelling stages of his artistic career. With a killer backing band featuring the great Earl Palmer on drums for most of the cuts and Herb Ellis guesting on a few. We find Jay singing about life, love and loss as well as feasting Mau Maus and pain, REAL PAIN.

From the album notes- “Producer’s Note: This album was recorded live at the Club Amigo in North Hollywood on June 23rd and 24th, Nineteen Hundred and Yesteryear, and is dedicated to President Nixon, whose efforts to recapture the era of the early 50’s do not pass unnoticed.” We debated swapping out Presidents’ names. Jay would have liked that. 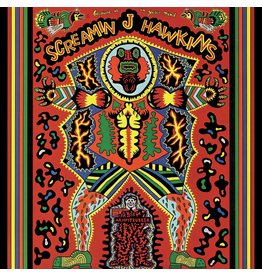 FIRST-EVER VINYL REISSUE SINCE ORIGINAL PRESSING IN 1970
Add to cart
Screamin' Jay Hawkins - Because Is In Your Mind
£39.99
Please accept cookies to help us improve this website Is this OK? Yes No More on cookies »