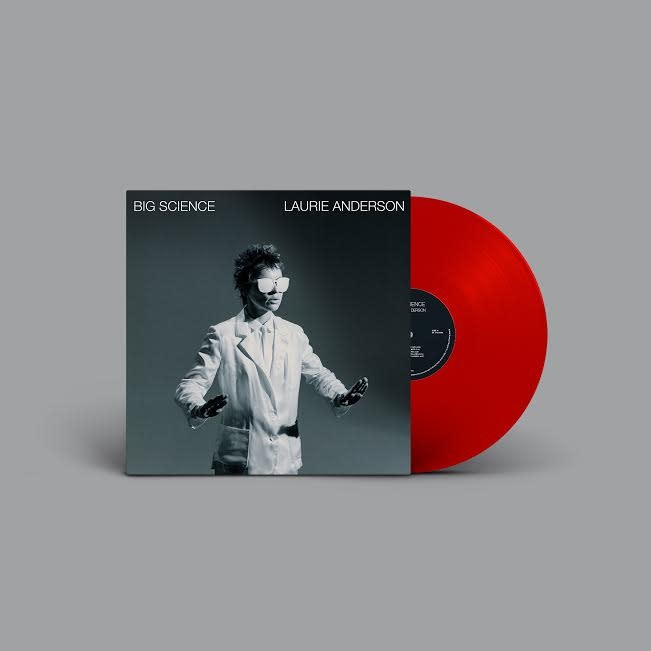 Laurie Anderson’s 1982 debut album, Big Science, will return to vinyl for the first time in 30 years with a new red vinyl edition on Nonesuch Records. The release includes the re-mastered original album first released on CD for the 25th anniversary in 2007. In the early 1980s, Laurie Anderson was already respected as a conceptual artist and composer, adept at employing gear both high-tech and homemade in her often violin-based pieces, and she was a familiar figure in the cross-pollinating, Lower Manhattan music-visual art-performance circles from which Philip Glass and David Byrne also emerged. While working on her now-legendary seven-hour performance art/theater piece United States, Part I–IV, she cut the spare ‘O Superman (For Massenet)’, an electronic-age update of 19th century French operatic composer Jules Massenet’s aria ‘O Souverain’, for the tiny New York City indie label 110 Records. In the UK, DJ John Peel picked up a copy of this very limited-edition 33⅓ RPM 7” and spun the eight-minute-plus track on BBC Radio 1. The exposure resulted in an unlikely #2 hit, lots of attention in the press, and a worldwide deal with Warner Bros. Records. At the time of its original release, the NME wrote of Big Science, ‘There’s a dream-like, subconscious quality about her songs which helps them work at deeper, secret levels of the psyche.’ With instrumentation ranging from tape loops to found sounds to bag pipes, Big Science anticipated the tech-savvy beats, anything-goes instrumentation and sample-based nature of much contemporary electronic and dance music. On the album’s 25th anniversary, Uncut noted, ‘The broader themes of alienation and disconnection still resonate, while Anderson’s use of loops and traditional/synthesized instrumentation is prescient.’ “In the ’70s I traveled a lot,” Anderson recounts. “I worked on a tobacco farm in Kentucky, hitchhiked to the North Pole, lived in a yurt in Chiapas, and worked on a media commune. I had my own romantic vision of the road. My plan was to make a portrait of the country. Big Science, the first part of the puzzle, eventually became part two of United States I–IV (Transportation, Politics, Money, Love). My goal was to be not just the narrator but also the outsider, the stranger. Although I was fascinated by the United States, this portrait was also about how the country looked from a distance. I was performing a lot in Europe, where American culture was simultaneously booed and cheered. But the portrait was also a picture of a culture inventing a digital world and learning to live in it. Big Science was about technology, size, industrialization, shifting attitudes toward authority, and individuality. It was sometimes alarmist, picturing the country as a burning building, a plane crash. Alongside the techno was the apocalyptic. The absurd. The everyday. It was also a series of short stories about odd characters – hatcheck clerks and pilots, preachers, drifters and strangers. There was something about Massenet’s aria O Souverain – which inspired O Superman – that almost stopped my heart. The pauses, the melody. Laurie Anderson is one of America's most renowned – and daring – creative pioneers. Her work, which encompasses music, visual art, poetry, film, and photography, has challenged and delighted audiences around the world for over 40 years. Anderson released her first album with Nonesuch Records in 2001, the critically lauded Life on a String. Her subsequent releases on the label include Live in New York (2002), Homeland (2010), the soundtrack to Anderson’s acclaimed film Heart of a Dog (2015), and her Grammy-winning collaboration with Kronos Quartet, Landfall (2018). Additionally, Anderson’s virtual-reality film La Camera Insabbiata, with Hsin-Chien Huang, won the 2017 Venice Film Festival Award for Best VR Experience, and, in 2018, Skira Rizzoli published her book All the Things I Lost in the Flood: Essays on Pictures, Language and Code, the most comprehensive collection of her artwork to date.