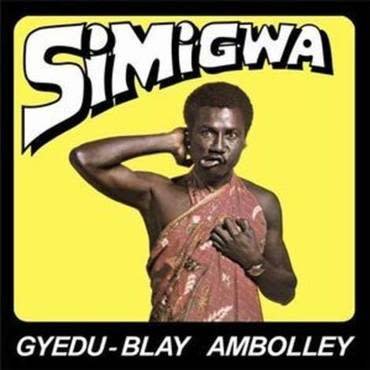 Legendary Ghanain album - with one of the most iconic covers ever! - that fuses Highlife, afrobeat, folk and funk. Ambolleys debut solo album originally released in 1975, written and produced with Ebo Taylor. Ambolley grew up during the peak of Highlife in Ghana and was a key figure in its fusion with soul and funk influences from the USA. He played in many bands including Houghas Extraordinaires, Meridians Of Tema, Ghana Broadcasting Band and the Uhuru Dance Band, for which he was recruited by his friend, Ebo Taylor. The group went to Nigeria in 1973 to play with Fela at his legendary Shrine spot. Simigwa was a chance for Ambolley to release his own productions and to experiment to a certain extent. A main inspiration for this album was the work of the mighty Mr. James Brown, something that is evident from the rhythm section, horns, vocal stabs and percussion breaks throughout the record.