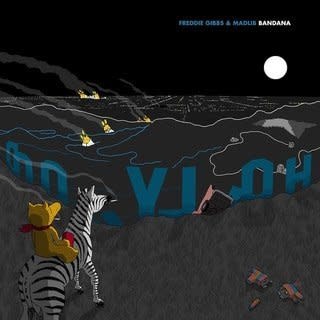 Freddie Gibbs and Madlib release their new album, Bandana. The album includes previous releases Flat Tummy Tea, Crime Pays, and Giannis featuring Anderson. Paak. The album is the pair's follow up to their 2014 critically-acclaimed debut Piñata, and includes additional features from Pusha T, Killer Mike, Yasiin Bey, and Black Thought. The duo's seamless collaboration juxtaposes two giant talents: Madlib,the prolific producer with a record collection spanning all genres and eras, an adept sampler, peer to the late J Dilla (his collaborator on Champion Sound and his musical soulmate), foil for DOOM, hip hop's Charlie Parker, with whom he created the landmark album Madvillainy. Freddie Gibbs, the gravel-voiced braggadocios rapper, a vocal athlete, a star-on-the-rise knocked off course who refused to give up and has since offered some of the most compelling rap music in the past ten years. On Piñata, Madlib offered Gibbs, then a gritty street rapper from Gary, Indiana, a chance to expand his captivating storytelling, giving him the dramatic backgrounds for his brutally-honest, soul-scraping lyrics. As a pair, Freddie and Madlib exude a natural chemistry and craft an alchemical music, appealing to everyone on the hip-hop spectrum.