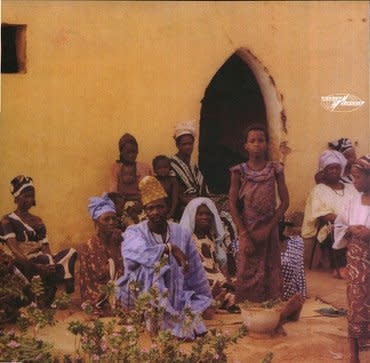 Remastered from the original tapes in 2004 for release on World Circuit, 2021 sees this classic album back on vinyl for the first time since its original 1984 release. In 1982, the great Malian singer songwriter and guitarist Ali Farka Touré, then still in the early years of his recording career, teamed up with the brilliant percussionist Hama Sankare. Together, from a base in Ali’s home village of Niafunké they travelled through Northern Mali, refining a collection of new songs. When they were ready to record they followed the River Niger as it wound down through the desert, to the capital city of Bamako. In one afternoon, the great Radio Mali house engineer Boubacar Traore captured these eight superb performances on two microphones: two voices so close it was thought they were double tracked, one guitar (the distinctive Bulgarian acoustic model that Ali treasured) and Hama’s calabash percussion making its first appearance on record. The album, which includes some of Touré’s best loved songs, was released self-titled with no sleeve notes, just an enigmatic group photo on the cover. It became known as the Red album due to the colour of its original sleeve. Vinyl and cassette copies of ‘Red’ began to circulate in West Africa, as well as making their way to Ry Cooder in the US and to specialist journalists and DJs in the UK and France. It was popular in Mali and the Tuareg refugee camps in Libya, where it became an influence on the musicians who came together as Tinariwen. On a tip from Toumani Diabaté and with a copy of Red in hand, World Circuit’s Anne Hunt travelled to Mali in the mid 80s to find Ali to invite him to record and tour. An appeal was broadcast over Radio Mali, and Ali, who by chance was visiting the capital Bamako, heard it. Thus began Ali’s incredibly successful international career which took him around the world and resulted in the release of eight acclaimed albums including three Grammy winning collaborations, with Ry Cooder (Talking Timbuktu) and Toumani Diabaté (Ali and Toumani; In The Heart of the Moon).