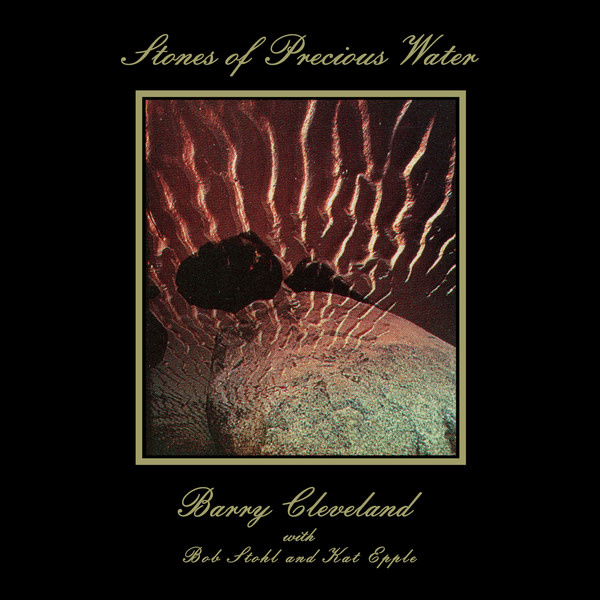 The title of guitarist Barry Cleveland’s 1986 album - Stones of Precious Water - conjures images of incandescent gems, harvested from hallowed streams and held aloft to glimmer and catch the light in their many facets. And perhaps this is the truest analogue for the music contained therein. Recorded between 1981 and 1983, in mostly improvised recording sessions, the disparate nature of Stones’ creation is alluded to only by the breadth and variety of sounds it encompasses. Stones of Precious Water is a revelatory collection that maps its way through textural fourthworld ambience, shimmering New Age, gently propulsive kosmiche, and jazzinflected prog. These sounds are sewn together with a deftness of performance and sonic character which reveals them as branches of the same tree, or perhaps more appropriately, a handful of glittering stones. Six of the ten tracks contain contributions from Kat Epple and her late husband Bob Stohl (a.k.a the epoch-defining New Age duo, Emerald Web), adding flute, synthesizers, and bells. Between the years of 1981 and 1983, Cleveland worked with this duo and alone, allowing serendipity to play a significant creative role in their music. Many of the pieces began as improvisations, or simple structures that served as springboards for deeper exploration. Making his first forays into multi-track recording, Cleveland used a basic Teac 4-track cassette recorder, and this rudimentary piece of equipment proved to be a useful tool for compositional exploration. By flipping and reversing the tape, slowing the pitch, and altering and layering different performances, Cleveland stretched the sound of his guitar across the expanse of the tonal canvas. Stones of Precious Water stands as a remarkable document of experimental selfrecording, improvisational collaboration, and restless creative expression. Morning Trip is exceedingly happy to release it on Vinyl LP for the first time.