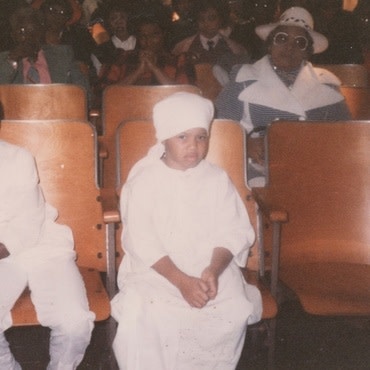 Following a flood of critical and communal acclaim from The Oracle’s January 2019 cassette-only release, the album is finally available on vinyl LP inside a deluxe old-style Stoughton tip-on jacket with insert card, IARC obi strip and dome-patterned inner sleeve. Composer, clarinetist, singer and spiritual jazz soothsayer Angel Bat Dawid descended on Chicago's jazz and improvised music scene just a few years ago. In very short time, the potency, prowess, spirit and charisma of her cosmic musical proselytizing has taken her from relatively unknown improviser to borderline ubiquitous performer in Chicago's avant-garde. On any given night you can find Angel adding aura to ensembles led by Ben LaMar Gay, or Damon Locks, or Jaimie Branch, or Matthew Lux, or even, on a Summer night in 2018, onstage doing a woodwind duo with Roscoe Mitchell. For her recorded debut on International Anthem, The Oracle, we've chosen to release a batch of tracks that Angel created entirely alone – performing, overdubbing and mixing all instruments and voices by her self – recorded using only her cell phone in various locations, from London UK to Cape Town RSA, but primarily from her residence in the attic of the historic Radcliffe Hunter mansion in Bronzeville, Southside, Chicago.