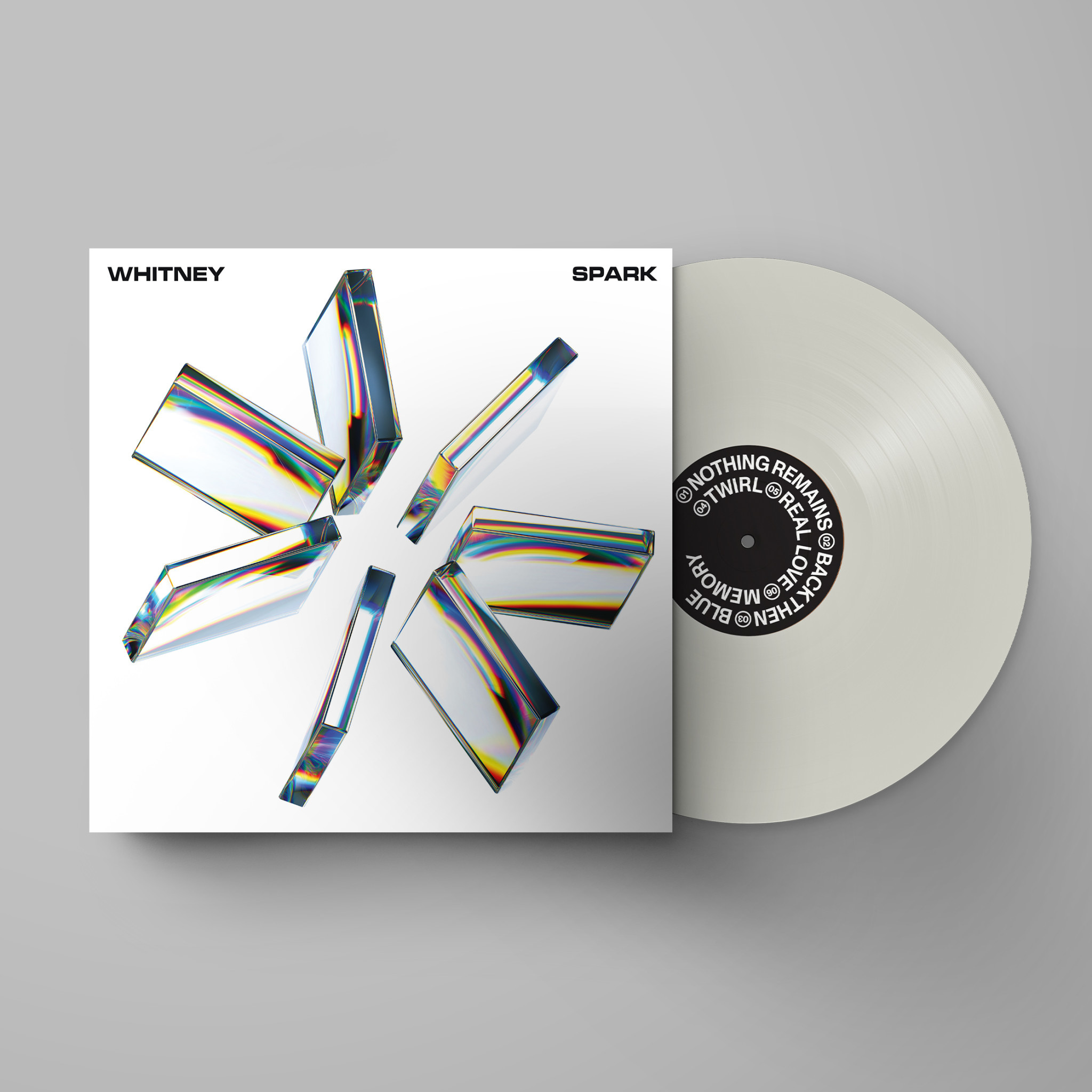 Julien Ehrlich and Max Kakacek could hear the staggering differences in the songs they were writing for their third album as Whitney, SPARK—the buoyant drum loops, the effortless falsetto hooks, the coruscant keyboard lines. They suddenly sounded like a band reimagined, their once-ramshackle folk-pop now brimming with unprecedented gusto and sheen. But could they see it, too?

So in the ad hoc studio the Chicago duo built in the living room of their rented Portland bungalow, a shared 2020 escape hatch amid breakups and lockdowns, Julien and Max decided to find out. Somewhere between midnight and dawn every night, their brains refracted by the late hour and light psychedelics, they’d play their latest creations while a hardware store disco ball spun overhead and slowed-down music videos from megastars spooled silently on YouTube. Did their own pop songs—so much more immediate and modern than their hazy origins—fit such big-budget reels? “We’d come to the conclusion we weren’t going to be filming Super 8 videos to this stuff anymore,” Julien remembers with a grin. “How about something more hi-fi, cinematic?” When the footage and the tunes linked, Julien and Max knew they had done it, that they’d finally found Whitney’s sound.

SPARK reintroduces Whitney as a contemporary syndicate of classic pop, its dozen imaginative and endearing tracks wrapping fetching melodies around paisley-print Dilla beats and luxuriant electronics. What’s more, Whitney reduces three years of extreme emotional highs and lows into 38 brisk but deep minutes, each of these 12 tracks a singable lesson in what it is they (and, really, we) have all survived. The recalcitrant ennui of opener “NOTHING REMAINS,” the devastating loss of “TERMINAL,” the sun-streaked renewal of “REAL LOVE”: However surprising it may sound, SPARK is less a radical reinvention for Whitney than an honest accounting of how it feels when you move out of your past and into your present, when you take the next steps of your lives and careers at once and without apology. SPARK maintains the warmth and ease of Whitney’s early work; these songs glow with the newness of now.

Listen closely, and you’ll notice frequent references to smoke and fire throughout SPARK, itself a double entendre for inspiring something new or burning down the old. Max and Julien were indeed in Portland for the Fall of 2020, when smoke from nearby fires choked the city at record levels. It was terrifying and tragic, but they pressed on. “We found a way to live while the world was burning/Real life was caving in,” Julien sings almost merrily during “BACK THEN,” an anthem for finding out what’s on the other side of hardship.

In these dire days, scientists speak increasingly of serotiny, an evolutionary miracle that causes some trees to release seeds only amid a season of fire. That is how SPARK often feels—Whitney’s circumstances were so fraught on so many levels that they hung “the past...out to dry” and began again, finding a fresh version of themselves, their relationship, and their band after the blaze. Max and Julien are back in Chicago now, sharing a cozy walkup with a little studio, where they’re already building songs for the next Whitney album. They’re both in happy romances, too. Now that they let the past burn, everything is new for Max and Julien. SPARK is not only Whitney’s best album; it is an inspiring testament to perseverance and renewal, to best friends trusting each another enough to carry one another to the other side of this season of woe.