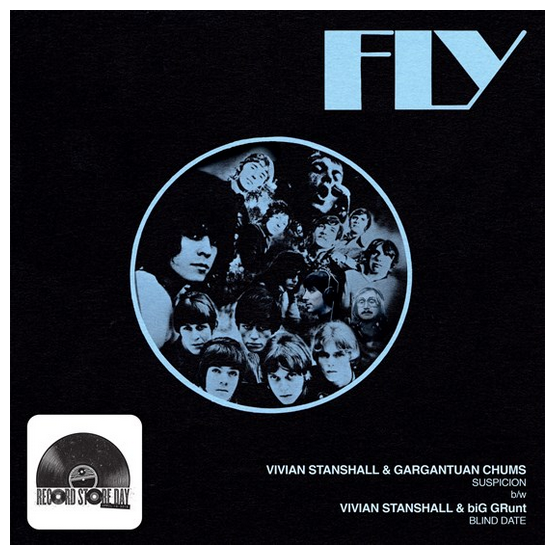 7" in transparent yellow vinyl. Fly Records launched in October 1970 with T. Rex’s first 45 Ride A White Swan which gave Marc Bolan his biggest hit to date reaching #2 and closed the year with a mid-December 45 release by Vivian Stanshall - one of Fly’s rarest and bizarre 45s. As the frontman with The Bonzo Dog Doo-Dah Band Vivian’s surreal comedic wit had attracted kinship with The Who’s manic drummer Keith Moon. When the Bonzos split up Vivian formed Big Grunt and with Moon in tow and recorded a single. Blind Date was rumoured to have been written for Matt Munro - nigh impossible to imagine. Moon brought along bass’n’brassist John Entwistle to the session possibly as an antidote to The Who’s yearlong promotion of rock opera Tommy, backing Stanshall on a jovial romp through Suspicion. Embellished with a quintessential Stanshall middle eight it sounds closer to Presley clone Terry Stafford’s version than the King’s own relatively insipid version. Surprisingly radio friendly it was cursed with wholly inappropriate promotional tomfoolery and a ludicrous Christmas time release date which even Good King Wenceslas could not avert its trajectory into oblivion. An almost instant rarity it remains the only known recording by the Gargantuan Chums as well as Keith Moon’s only record production.

Originally the 4th single release on Fly Records this premier re-issue is remastered and reissued exclusively for RSD2019 on transparent yellow vinyl, housed in a pic sleeve and limited to 500 copies. As Fly approaches 50 it is the first in a series of celebratory reissues.