Various - Under The Influence Vol. 7

Home / Various - Under The Influence Vol. 7 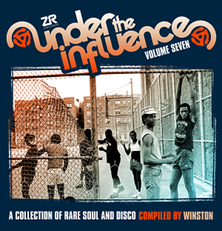 Z Records continues its commitment to unearthing the obscure and long forgotten tracks from the last 40 years through the ever-popular Under The Influence series. Following on from Red Greg, Paul Phillips, James Glass, Nick The Record, Sean P and Faze Action it’s now the turn of one of the scenes most prolific but yet unknown collectors, Winston.

Outside of the established record collectors Winston is pretty much unknown but those that know of him will tell you that despite his low profile he has one of the best record collections around. So for Volume Seven of the Under The Influence series Winston has included tracks taking in soul, funk, disco and boogie with many of the tracks costing hundreds if you were able to find the originals. As always with ZR compilations a lot of time and effort has been spent on creating these masters from the original vinyl, cleaning them up, removing all the clicks and pops resulting in the cleanest sounding copy possible.