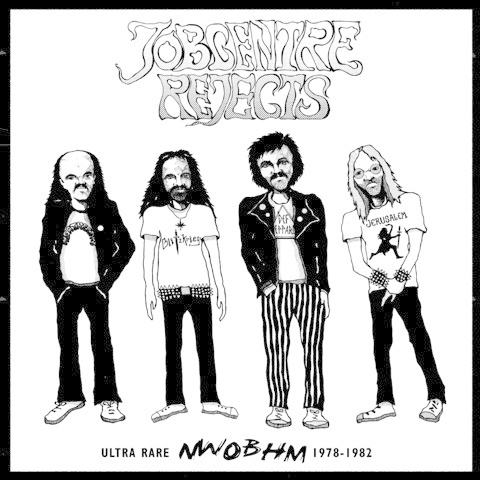 A really thoroughly researched compilation documenting the NWOBHM phenomenon's rarer out reaches. Twelve tracks licensed from rare and hard to find New Wave Of British Heavy Metal-singles originally released in England 1978-1982. Kind of a Nuggets, Pebbles or Killed By Death for NWOBHM. Jobcentre Rejects will appeal to all metal fans, but also to punk fanatics, garage rock-maniacs, DIY-lovers and maybe even to a few powerpop aficionados. Jobcentre Rejects is for everyone into rock music history and anyone interested in British music - and culture history. Iron Maiden, Def Leppard, Judas Priest and Saxon all got signed by majors and sold records galore, meanwhile bands in every village across England formed. Inspired by the energy and DIY attitude of the punk scene these acts recorded and released their records all on their own. The music heard on Jobcentre Rejects have so far been treasured only by NWOBHM connoisseurs. Jobcentre Rejects clearly shows that it is music far too good to be buried in the past. It’s music that deserve to be heard not only by the most die hard record collectors. Remastered and restored sound. Extensive liner notes by Kieron Tyler (Mojo Magazine). Richly illustrated with many rare photos from band members' own collections.

On The Dole Records