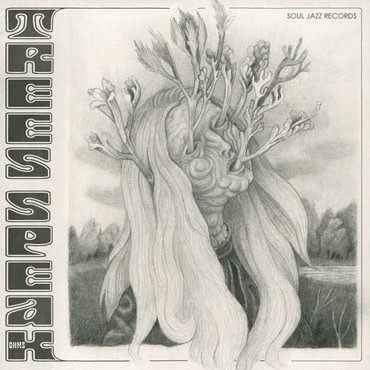 When the band Trees Speak, coming out of nowhere, released an exclusive one-off 100-pressing white label 45, described as Can / Neu! meets Liquid Liquid, it sold out so quickly (in less than 30 minutes) that Soul Jazz Records decided to release their album almost immediately. Soul Jazz Records rarely release new music but found the music of Trees Speak’s album Ohms so stunning and to have so many elements of music that they admired that they felt compelled to release it. The group Trees Speak are from Tucson, Arizona and create new music that sounds like German Krautrock meets no wave/post-punk and psych rock - music for fans of Cluster, Tangerine Dream, Can, Neu!, Silver Apples and early Kraftwerk. The album Ohms sounds at times like a tripped out and moody John Carpenter / Goblin / Morricone soundtrack that seamlessly segues into propulsive, ‘motorik’ Krautrock instrumentals loaded with fuzzy, hypnotic mellotron, synths and analogue effects, as well as elements of Art Ensemble free jazz, and all at times reaching a kind of post-rave psychedelia. More recent comparisons would include Beak> and Ghost Box who draw upon similar themes and styles. Trees Speak relates to the idea of future technologies storing information and data in trees and plants - using them as hard drives - and the idea that Trees communicate collectively. Includes an exclusive bonus 45 single (the white label which sold out so fast) that will only be available with the first orders of this amazing and ground-breaking new album.