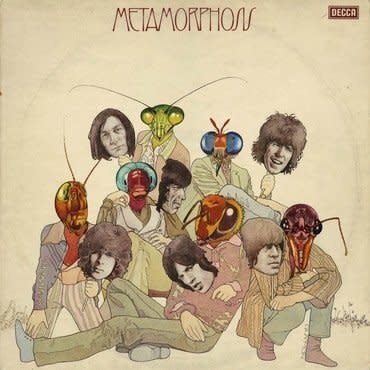 A special Record Store Day 2020 release, available in store on the 24th of October  Remaining stock will be available to order online from 6pm on the same day.

The first official Rolling Stones’ rarities collection Metamorphosis was originally released in June 1975 to try to outwit the bootleggers. The release combines legendary outtakes and rarities as well as the wealth of demos that Mick Jagger and Keith Richards composed for other artists, which were subsequently re-recorded by the Stones themselves. The collection includes an orchestrated version of Out Of Time, recently featured in Quentin Tarantino’s Once Upon a Time in Hollywood. The Record Store Day 2020 limited edition of the U.K. version of Metamorphosis is released on hunter green-coloured vinyl and includes a full color exclusive iron-on t-shirt transfer of the album artwork, which alludes to Franz Kafka’s novella The Metamorphosis, the story of a man who wakes up one morning to find himself inexplicably transformed into a huge insect.