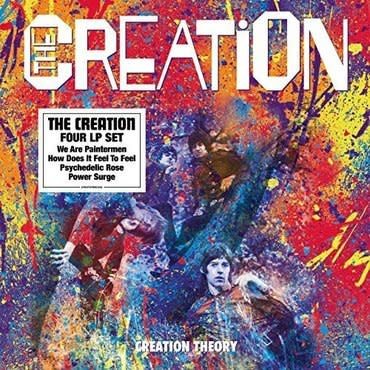 4LP Set in Outer and Inner Sleeves, in Rigid Slipcase. Alan McGee was such a big fan of The Creation that he named his record label after the band, and named his own band after one of their songs – Biff Bang Pow. The Creation was formed in 1966 from beat combo The Mark Four, and was quickly signed to a production deal with Shel Talmy, The Who’s producer. The four LPs include all of The Creation’s legendary recordings for Shel Talmy (the 2016 stereo mixes appear on LP for the first time), We Are Paintermen replicating the 1966 German LP, the only Creation album released anywhere in the 60s. How Does It Feel To Feel rounds up the remainder of the 60s recordings, and the 1987 album Psychedelic Rose and the 1996 Creation Records album Power Surge complete the set.