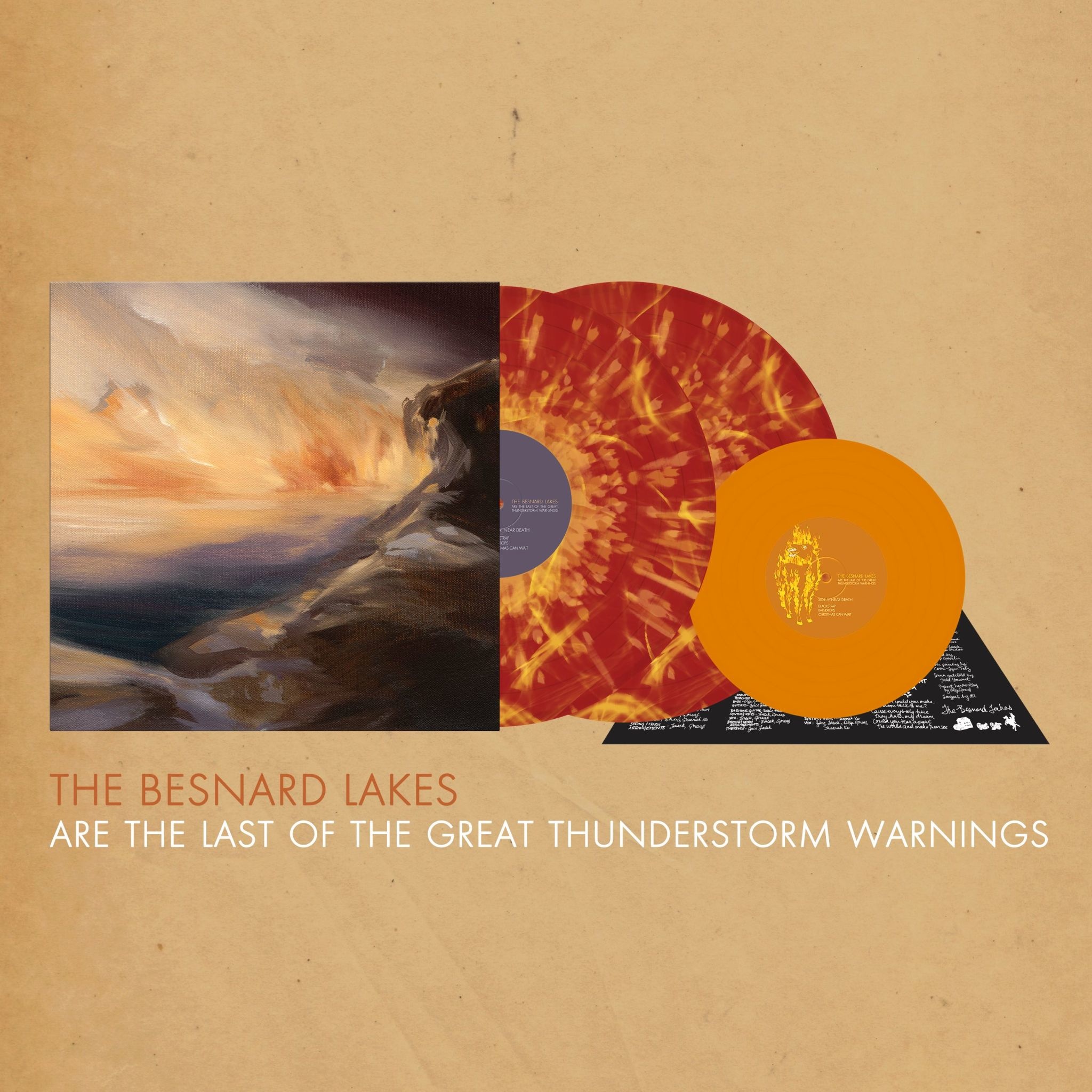 Dinked edition: limited to 500 hand numbered copies on orange and red splatter vinyl with exclusive orange flexidisc of the track Superego. The Besnard Lakes have passed through death and they’re here to tell the tale. Nearly five years after their last lightning-tinted volley, the magisterial Montreal psych-rock band have sworn off compromise, split with their long-standing label, and completed a searing, 72-minute suite about the darkness of dying and the light on the other side. The Besnard Lakes Are The Last of the Great Thunderstorm Warnings is the group's sixth album and the first in more than 15 years to be released away from a certain midwestern American indie record company. After 2016's A Coliseum Complex Museum - which saw Jace Lasek and Olga Goreas attempting shorter, less sprawling songs - the Besnards and their label decided it was time to go their separate ways; with that decision came a question of whether to even continue the project at all. What use is a band with an instinct for long, tectonic tunes - rock songs with chthonic heft and ethereal grace, five or 10 or 18 minutes long? How do you sell that in an age of bite-sized streaming? How do you make it relevant? Who gives a shit! the Besnard Lakes realized. Ignited by their love for each other, for playing music together, the sextet found themselves unspooling the most uncompromising recording of their career. Despite all its grandeur, ...The Last of the Great Thunderstorm Warnings honours the very essence of punk rock: the notion that a band need only be relevant to itself. At last the Besnard Lakes have crafted a continuous long-form suite: nine tracks that could be listened together as one, like Spiritualized's Lazer Guided Melodies or even Dark Side of the Moon, overflowing with melody and harmony, drone and dazzle, the group's own unique weather. Here now, the Besnard Lakes finally dispensed with the two/three-year album cycle, taking all the time they needed to conceive, compose, record and mix their opus. Some of its songs were old, resurrected from demos cast aside years ago. Others were literally woodshedded in the cabanon behind Lasek and Goreas's "Rigaud Ranch" - invented and reinvented, relishing this rougher sound. Some of that distortion makes its way into the final mix: an incandescent crackle that had receded from the Besnards' more recent output. Rightly - nay, definitively! - The Besnard Lakes Are The Last of the Great Thunderstorm Warnings is a double LP. Near Death is the title of the first side. Death, After Death, and Life follow next. It's literally a journey into (and back from) the brink: the story of the Besnard Lakes' own odyssey but also a remembrance of others', especially the death of Lasek's father in 2019. Being on your deathbed is perhaps the most psychedelic trip you can go on: in Lasek's father's case, he surfaced from a morphine dream to talk about "a window" on his blanket, with "a carpenter inside, making intricate objects." That experience pervades the album, catching fire on the song Christmas Can Wait; elsewhere the band pays tribute to the late Mark Hollis and, on The Father of Time Wakes Up, they mourn the death of Prince. In these scorched and pitted times, as the world smoulders, there might be nothing less trendy than an hour-long psych-rock epic by a band of Canadian grandmasters. Then again, there might be nothing we need more. ...The Last of the Great Thunderstorm Warnings is a bright-blazing requiem: nine tunes that are one tune and six musicians who make one band - unleashed and unconstrained, piercing and technicolour. At the end of the golden day, the Besnard Lakes are right where they should be.