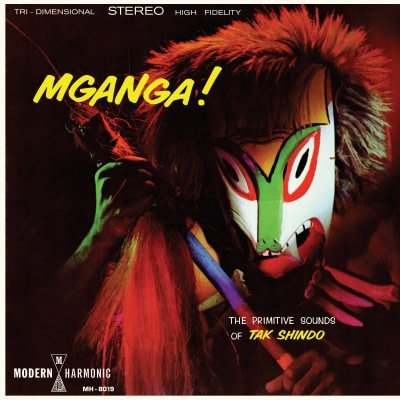 The work of Takeshi "Tak" Shindo (1922–2002) isn‘t hard to determine stylistically: he mixed Asian instruments with the aesthetic desires of Hollywood. When the Exotica genre was on the rise in 1957/58, Shindo was already a busy advisor regarding Asian flavors and faithful settings in films and TV series. Mganga!, his first original album, marks a sudden short term departure from Far Eastern territories and moves into unexpectedly murky faux-African lands, making Shindo leave his signature instrument, the koto, behind. Africa may be one continent, but it was and still is to this day highly diverse in its culture and inherited lifestyle.

Naturally, these remarks aren‘t of any interest in regard to Easy Listening and Exotica albums, and yet they are of particular relevance here, for Shindo tries and succeeds with his ambitious approach by featuring several instruments of African descent and intricated melodies that were far ahead of the clichéd competition, including the Exotica grandmasters whose names and music form the base for further ventures of 60‘s records into exotic lands. Shindo doesn‘t adapt specific melodies of African origin, but takes the same approach as every other Exotica musician at the time: analyzing certain African characteristics, coming up with a few Western, modern-world additions and uniting them so grandiloquently that the result seems to be surreal and mind-blowing to the listener, yet distantly familiar and comforting.