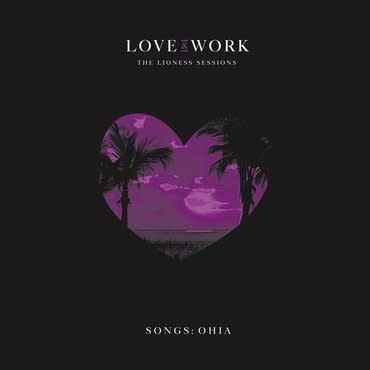 Purple vinyl. The Lioness is the first Jason Molina project to fully turn away from the battlefield folk and deconstructed Americana of earlier Songs: Ohia recordings. At the dawn of the 21st century, the album felt modern. It aligned Molina with a new set of peers - Low, Gastr del Sol, Red House Painters and, most importantly, the influential Scottish band Arab Strap, whose producer and members were crucial in the creation of The Lioness. The avant-garde tones and arrangements of Arab Strap are absorbed here into Molina's songwriting to create what would become, for many acolytes, the archetypal Songs: Ohia sound.

Love and Work: The Lioness Sessions, the box set reissue, will serve as the seminal log of the era, complete with lost songs, photos, drawings, and essays from those who knew Molina best. We know Molina was diligent in both love and work. He treated songcraft like a job at the mill, and his approach to romance was not so different. We know that when he fell in love with his wife, he was dutiful in his adoration. There were strings of love letters and poetic gesture. Included in this edition are replicated examples of this relentless love - an envelope with a letter from Molina, a photograph of Molina and his to-be wife, a postcard, a Two of Hearts playing card, and a personal check for one million kisses. Some of these items were gifts he would send to his new love from the road; others, like the 2 of Hearts, were totems he'd carry with him around this time as a symbol for his burgeoning love. And so, the head-over-heels album that is The Lioness has its workman counterpart.

Nearly another album's worth of material was recorded in Scotland during the album sessions. While similar in tone and structure, the songs seem to deal in the grit and dirt of being. These are songs for aching muscles getting soothed in the third-shift pub. But they're also examples of Molina's diligence as he constructs what would be the essential elements of The Lioness. In addition to these outtakes, we also have a 4-track session made weeks earlier in London with friend James Tugwell. Comprised of primarily guitar, hand drums and voice, these songs are raw experiments that mostly serve to illustrate Molina's well of words and ideas. But then, there is the devastating Sacred Harp hymn Wondrous Love. While he may have had his new love in mind, one can't help but think of Molina's legacy as he softly warbles "Into eternity I will sing / Into eternity I will sing." You don't have to try too hard to mythologize Molina. He did all the work for you.