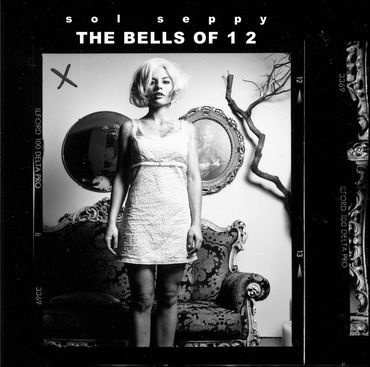 Sol Seppy and The Bells Of 12 is the debut outing from the heart and mind of Sophie Michalitsianos. Originally released on CD only in 2006 this is its first time on vinyl. Born in England and growing up between here and Australia she began writing songs at five years old. At sixteen, Sophie began writing music for television documentaries and swapping her vocal abilities for free studio time at the EMI studios in Australia. She received various offers from labels, but none which gave her the creative freedom she desired so Sophie politely declined. She was accepted into the Sydney Conservatorium of Music, where she studied contemporary composition and orchestration, she’s a classically trained pianist and cellist. At twenty-three Sophie moved to the States and not long after touch down received word that Mark Linkous of Sparklehorse had heard her music and wanted her to join them for their tour with Radiohead. Sophie obliged, and afterwards found herself contributing to Sparklehorse’s albums, Good Morning Spider and It’s A Wonderful Life. After her time with Sparklehorse, Sophie continued pursuing numerous musical avenues until she could afford a move to upstate New York and set up her own studio. After a few false starts, the catalysts for The Bells of 1 2 finally materialised into a cohesive vision. As the sole voice and creator behind Sol Seppy, Sophie embraced the roles of writer, performer, engineer and producer. The album’s celestial romanticism glows in Sophie’s enchanting vocals, reminiscent of Mazzy Star and the Cocteau Twins, each track a channel to some uncanny territory. Slo Fuzz beckons with an affectionately plaintive chorus bubbling over ethereal melody lines. Wonderland tells the story of an artist with the sinking feeling that a change will never come. Come Running is a curious ode to companionship. Enter 2 Human plays out as one of the most heartrending incitements in recent years. Each song is more than enough to get lost in. This enchanting album is prismatic by nature, “It’s the discovery of beauty that inspires me the most,” she says, clandestinely hinting at an endless impetus for the songs of Sol Seppy.