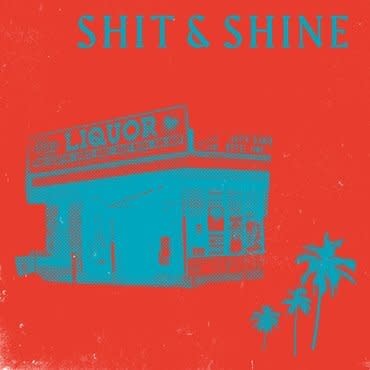 Red and blue swirl coloured vinyl. So, what have you been doing in 2020? Tensions have mounted, turmoil has reigned and work emails have forever rung out with boilerplate platitudes as the world has ushered in a new decade in more uncomfortable and disquieting fashion than anyone could have imagined in January. Nonetheless, amidst such mental tumult Craig Clouse - the Austin-based sage of the aurally unclean also known as Shit & Shine – has been busily channelling the interface between the surroundings and his own wayward muse into Malibu Liquor Store – a lockdown-birthed psychic landscape mapped out in the first half of this turbulent year. The only expectation any relatively well-adjusted person should have of Shit & Shine remains the unexpected at this stage, with Clouse having released well over thirty records on multiple labels in a storied, questing and uniformly invigorating catalogue – just as comfortable with both bloody-minded electronic assaults and noiserock-driven dirge, as adept at kraut-hammered rhythmic mantras as dancefloor-friendly abstraction. Malibu Liquor Store is none of these things exactly yet simultaneously flirts cheerily and irreverently with all of them. Always shot through with gleeful humour, this is a sonic world that recognises neither boundaries nor common sense. Craig Clouse cares not for your definitions of psych or dance music, and he’s never more comfortable than when transcending and annihilating both generic headspaces with casual ease and cheerful panache. Instead, these heat-damaged jams mark a spectral collision course between infectious glitch-heavy groove and an appropriately Texan acid-flashback aesthetic - a world in the last fifty years of culture are reflected and refracted back ad absurdum. Co-ordinates and reliable audial landmarks are rendered meaningless as the title cut comes on like a ‘60s Morricone chase sequence reassembled in new electronic shapes like lysergically-assisted Meccano. Rat Snake sees the humid grooves of Can’s Soon Over Babaluma bludgeoned into delirious submission. Devil’s Backbone witnesses Buttholes- esque transgressions of the ‘80s beamed forward Terminator-style to a cyborg-ridden dystopia, and the glorious skeletal groove of album centrepiece Hillbilly Moonshine meanwhile is nothing less than workout music for the damned – a relentless and pulsating soundtrack for a generation of ghouls mounting a legion of rowing machines along a metaphysical river Styx. The creation of Malibu Liquor Store may just have helped Craig Clouse keep his sanity in 2020, even if it appears custom designed to help us lose our own.