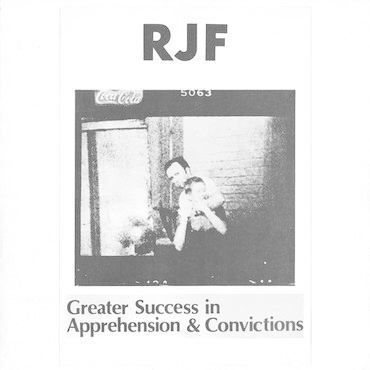 Originally released in a very limited edition during 1983. The RJF album has gone onto achieve legendary status amongst both collectors and fans of 80's murky Industrial underground music. Crawling out from the dark heart of Gothenburg, Sweden to no fanfare whatsoever, this record now commands a high three figure sum on the very scarce occasions it actually appears for sale. It is now considered to be one of the true corner stones of Swedish dark electronic music and , unlike a lot of obscure records from the same period, with very good reason. The record just oozes ill intent from all seven tracks. It's riddled throughout with a grim lo-fi electronic minimalism that makes the record so effective. The tracks run the gauntlet of sparse programmed beats, sustained heavy distortion that oscillates and weaves its way around monotone depressive and painful vocal outbursts as it crawls off back into its dark corner. There's no love to be found here. This reissue comes courtesy of Harbinger Sound. Original artwork and extensive sleevenotes as ever.