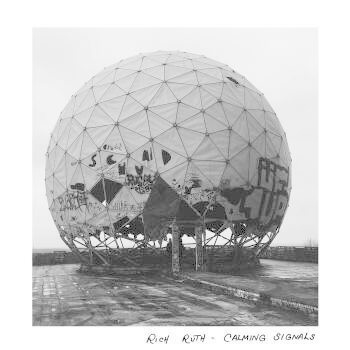 Michael Rich Ruth has composed ambient music for a long time. After a break from years touring with different bands, he spent his free time in a small home studio in North Nashville. The blueprints for Calming Signals began to emerge through a more dedicated focus on the diverse traditions of ambient, new age, and minimalist music. The ideas became realized pieces when Ruth started to collaborate with friends. These players transformed the material into something much more lush and unpredictable; pairing repetitive, droning synthesizer movements with organic improvisation. Calming signals is a term that refers to the way dogs communicate stress and use certain mechanisms to calm themselves or reset. Ruth relied on the creation of this music to find peace and balance amidst trauma. One summer morning while he was recording the album, Ruth was held up at gunpoint and carjacked by two people outside of his home. The following weeks were spent working on Calming Signals with a new layer of angst and emotion. These compositions became a means for him to work through this personal struggle and organize his anxiety into something constructive.