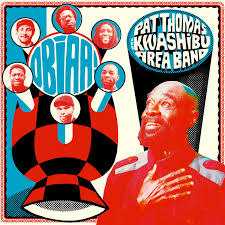 Pat Thomas and Kwashibu Area Band’s sophomore release Obiaa!. The album, produced again by Kwame Yeboah and Ben Abarbanel-Wolff at Lovelite Studio’s analogue HQ in Berlin, is a deep and soulful journey into the heart of Ghana’s indigenous highlife music celebrating the timeless and iconic voice of Pat Thomas, the 72 year-old “Golden Voice of Africa”. After producing Ebo Taylor’s seminal albums Love and Death and Appia Kwa Bridge for Strut Records, in 2014 Ben Abarbanel-Wolff approached Kwame Yeboah, Ghana’s top contemporary instrumentalist and bandleader, to work on a new project: “We initially wanted to invite Pat back into the studio with Ebo Taylor and Tony Allen to recreate and expand on some of the vibes they had recorded together during a lost session in 1977,” Ben explains. Recorded in Accra, the result was the critically acclaimed self-titled debut album Pat Thomas and Kwashibu Area Band in 2015. Pat and the Kwashibu Area Band (named after Kwame’s neighbourhood in Accra) hit the road in October 2015. The new album is called Obiaa! which means Everybody!. Tracks include the modern parables Onfa Nkosi Hwee warning against arrogance and Odo Ankasa about the value of real love and trust as well as a great new cover of Thomas’ Afro-disco favourite Yamona. “Playing highlife around the world taught us what we had to do to move our sound forward,” continues Ben. While simultaneously looking back towards the classic days of highlife and forward to a fresh revival of the guitar band sound, this album cements Pat Thomas and Kwashibu Area Band’s position at the pinnacle of modern African music.