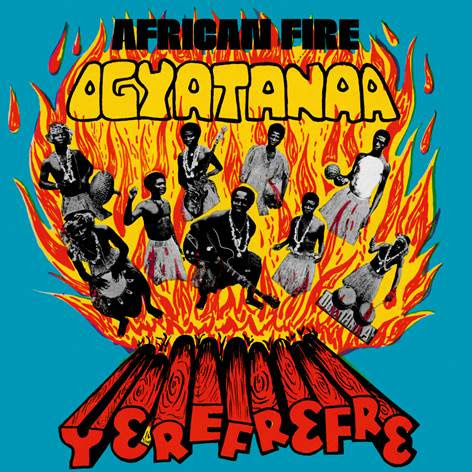 The Ogyatanaa or Burning Fire Show Band was one of the more esteemed of the funky highlife groups that rocked the Ghanaian music scene during the 1970s. The band was formed in 1971 by diplomat-turned-composer, musical arranger, organist, vocalist and record producer Kwadwo Donkoh (a former member of the Uhuru Dance Band), with guitarist and bandleader Nana Ofori-Atta (AKA Ahomansia Wura) and other members that later left the group. The Ogyatanaa Show Band made a rapid impact, scoring second place in the National Dance Bands competition after being together for less than a year, thanks to their superlative arrangement of the oft-versioned highlife classic, Yaa Amponsah, a tale of a mythical woman which became a popular single when issued on Donkoh’s Agoro record label. After issuing a number of other popular singles, the band’s debut album African Fire – Yerefrefre was finally released in 1975, the line-up now composed of Donkoh and Nana Ofori with drummer and assistant bandleader Ocloo Jackson, bassist Kobina Gardiner, keyboardist Ofori Frimpong and vocalists/percussionists Kwaku Dua and Pa Oweridu, plus Nakai Nettley on additional percussion. This outstanding LP begins with the unprecedented extended highlife medley of over twenty minutes duration entitled Yerefrefre which revisits highlife gems of the past; for instance, noteworthy material by giants such as E.T. Mensah, C.K. Mann, Nana Ampadu, E.K. Nyame, King Onyina, Jerry Hansen, King Bruce and Dr. K. Gyasi are all referenced, with E.T’s anthem All For You and The Black Beats’ Lai Momo getting special attention. Mmobrowa (or The Downtrodden) was another popular single issued prior to the album’s recording and listening to the slowly unfolding groove of the rendition included here, it’s again easy to understand the song and group’s enduring popularity in its homeland. Similarly, Yaa Amponsah and the religious praise song Agya Nyame are total highlife killers encompassed in rousing melodies and complex propulsive rhythms.