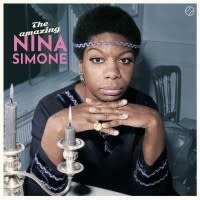 Nina Simone made her first trip into the studio in New York during 1957 to record her debut album Little Girl Blue. Simone would not record again for two years. She signed a contract with the New York-based label Colpix Records in 1959, with whom she recorded her second album, The Amazing Nina Simone (Colpix SCP407). The LP, presented here in its entirety along with four tunes that complete the session but were not included on the original album, features her singing (and playing a little piano) with an orchestra under the direction of Bob Mersey. Seven further bonus tracks have been added, among them four tunes issued as Colpix singles during the same period, an outstanding live version of Nobody Knows You When You’re Down and Out, and her unforgettable My Baby Just Cares for Me. Nina Simone, vocals & piano Orchestra conducted & arranged by Bob Mersey New York, May 1959. Original sessions produced by Hecky Krasnow.