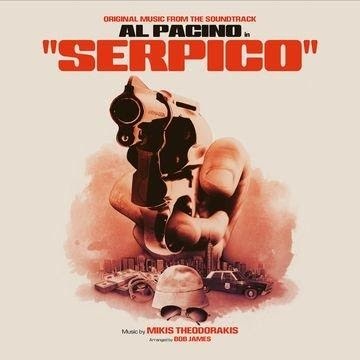 Special Record Store Day edition of the Serpico classic soundtrack from 1973 composed by Mikis Theodorakis. reissued on vinyl for the first time in decades, with remastered audio, gatefold sleeve, artwork by Eric Adrian Lee and sleevenotes by film critic Jason Wood including a special interview with arranger Bob James. Sidney Lumet's masterpiece Serpico released in 1973 is one of the most iconic movies of the 70s. Featuring a career-defining performance by Al Pacino in the title role, it's a superb neo noir encapsulating the post-Watergate mood of the early 70s. The film's soundtrack by Mikis Theodorakis is equally stunning. Composed by Greek musician and arranged by cult jazz pianist Bob James, it is a superb blend of funky instrumental and traditional melodies reminding The Godfather OST.