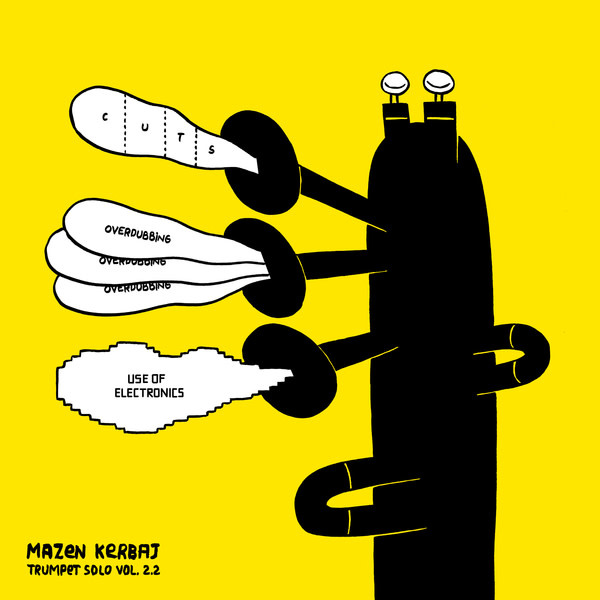 Comic book artist, graphic designer and free jazz improviser are only some of the many talents from Beirut born Mazen Kerbaj. After appearing as part of various ensembles on the label, Ariha Brass Quartet and Johnny Kafta Anti-Vegetarian Orchestra, Kerbaj finally lands a solo outfit of his own onto the Discrepant dancefloor of misdemeanor. 14 years after his first (and only) solo album Brt Vrt Zrt Krt Mazen returns with a series of loud oozes (entirely) of his own with not one but two(!) solo albums of prepared trumpet that further cement his international position as a serial trumpet botherer. Showcasing his very own and singular arsenal of squawks, cackles, howls and squeals the notion of being transported to a luring mutant underwater alien community is only occasionally dispelled with the sporadic passages of fluctuating tones and pulsations, like a restful humpback whale puffing on a hookah pipe at the ocean’s deep end. Mazen pulls out all the proverbial stops here, displaying a unique mastering of the instrument and its improbable add-ons creating various vignette like episodes rich in texture and variations – unlike anything else out there – not that you’d knew anyway. Where Vol. 2.1 shows an astounding use of the instrument without recurring to cuts, overdubs or electronics, Vol. 2.2 raises (or shatters) the bar with its intentional use of everything Vol. 2.1 was denied. And Mazen is right about advising us, the sounds emitted on each record are beyond the limits of believable. Either he is using tricks or just prepared techniques the results go far beyond the reach of a normal or casual listener. Listen to the albums back to back and you’ll know what we mean.