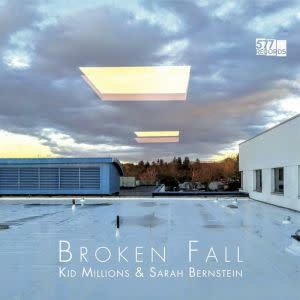 When Kid Millions and Sarah Bernstein conceptualized their new album, they decided to move away from well-trodden improvisational approaches and towards more transcendental, otherworldly sounds. Pulling inspiration from disparate influences such as early liturgical music, Ornette Coleman, Yoko Ono, masters of dub and drummer Milford Graves, they set out to create a cyclical form of spontaneous thematic music. The result is driving and expressive, with pieces of gem-like brevity placed alongside others of sustained evolving intensity. The duo started playing together regularly in 2014. Their early performances were surprising, suggesting new avenues of spontaneous composition. They gradually developed an approach that utilizes an extreme range of dynamics and note density, from pin-drop violin pizzicato and cymbal scraping to powerful electronics, wild vocalizations, and unrelenting drum textures. Broken Fall is their second album with 577 Records. This recording is the first to include Sarah's poetry as lyrics. The text is barely decipherable, intertwined musically with her otherwise wordless vocal expression, yet the rhythm of the words and the meaning drives the temperament of the album. Broken Fall is a huge step forward for the duo; an album that fully captures their fluent musical relationship.