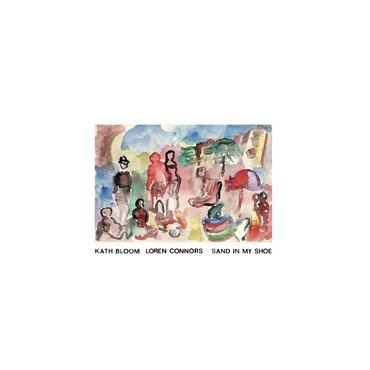 Blue vinyl. Reissue of 1983 private folk album by revered Connecticut duo. Loved by the likes of Bill Callahan, Mark Kozelek and Devendra Banhart. The extraordinary creative partnership of New Haven, CT duo Kath Bloom and Loren Connors has haunted folk fans since the early 80s. Kath taught herself guitar during shifts as a janitor at a New Haven cemetery, while Loren’s free-form style had been developing since the late 60s. Between 1981 and 1984, the duo recorded six studio albums, mostly self-released in tiny quantities. Early on, their music mixed folk and blues traditionals with a handful of Kath’s vulnerable, moving originals. By the later albums the songs were all Kath’s - her fragile voice and subdued finger-picking set against Loren’s abstract but always supportive playing. Together the duo created a sound almost impossibly emotional and haunting. Sand In My Shoe emerged in 1983 as the first release on Loren’s new label St. Joan, in an edition of 200-300 copies with handmade sleeves. Two more albums followed before the prodigious duo parted ways in 1984. Kath did not release anything again until a 1993 solo cassette, but then developed a devoted cult following through the pivotal use of her song Come Here in Richard Linklater’s 1995 film Before Sunrise.