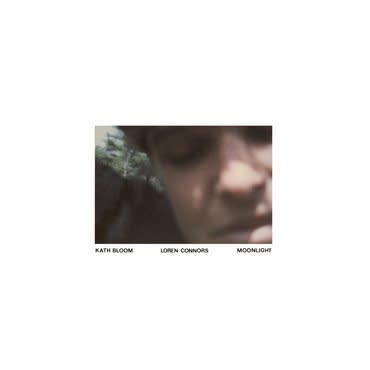 Blue vinyl. The extraordinary creative partnership of New Haven, CT duo Kath Bloom and Loren Connors has haunted psych-folk fans since the early 80s. Kath taught herself guitar during shifts as a janitor at a New Haven cemetery, while Loren's free-form idiosyncratic style had been developing since the late 60s. Between 1981 and 1984, the duo recorded two live and four studio albums, mostly self-released in tiny quantities. Early on, their music mixed folk and blues traditionals with a handful of Kath's vulnerable, moving originals. By the later albums the songs were all Kath's - her fragile voice and subdued finger-picking set against Loren's abstract but always supportive playing. Together the duo created a sound almost impossibly emotional and haunting. Moonlight emerged as the duo's final album in 1984, in an edition of 200-300 copies. As her creativity accelerated, Kath's songs became looser and more intuitive, but Moonlight contains an early version of one of Kath's most beloved songs, Come Here. Loren's longterm collaborator Robert Crotty contributes electric guitar to a couple of tracks.