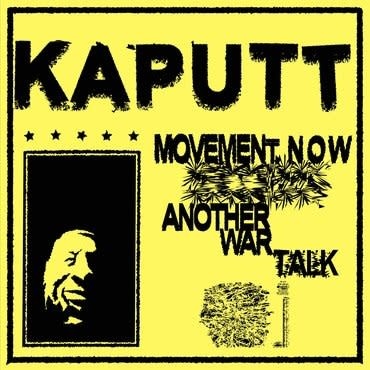 Blue vinyl. Glasgow post-punk six-piece Kaputt aren’t strangers to directing their explosive energy and maximalist vibrancy in the name of allegory and critique. Their 2019 debut album on Upset the Rhythm Carnage Hall confidently deconstructed themes of surveillance, paranoia, and cultural identity through a sonic lens of high-tempo, bright, danceable pop hooks and technical, polyphonic rhythms which border on the bombast of Zeuhl. New EP Movement Now / Another War Talk continues the synthesis of animation and discontent with an ethos that exemplifies post-punk’s most original and guiding purpose: casting aside the rigid, signifying fashions of modern performative genre tropes and instead combining a vast fluidity of influence, tone and style to create something as unique and personal as it is counter-cultural. The result is a release that responds to the apathy of our current situation with a positive thesis, breathing life into the lived-in, bursting through every vessel, leaving nothing unturned. Movement Now enters with the distinct high-low drive of guitar whines and racing low toms, emblematic of the presence one feels when pushing past bodies in a heaving DIY venue, but it is not afraid to play with expectations. When the song thematically opens out, disrupts convention and progressively rebuilds upon itself, the track, a comment on the ever-lagging pace that jaded, old values take to transform, transitions from a goth aesthetic to the optimism characteristic of any indie heavyweight. Another War Talk shines in production and composition as arguably one of the best examples of distilling the band’s manic live energy into a studio recording. The divergent vocal duality of Cal D. and Chrissy B. accompanied by competing percussionists and dynamic saxophone lines encapsulates the performative strengths that has allowed the band to become a constant highlight in Glasgow’s ever exciting DIY scene. It is, in essence, the naturalness by which six passionate voices can combine into one vision so seamlessly, which one who has not experienced the band live should take away from the track for now in anticipation of the future.