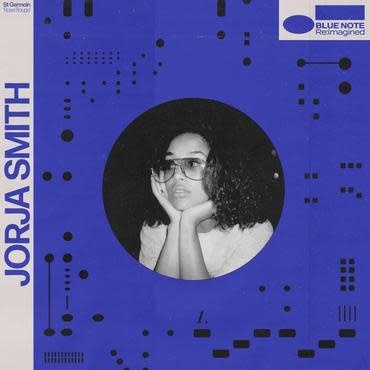 Legendary labels Decca Records and Blue Note have joined forces for Blue Note Re:imagined; a brand new collection of classic Blue Note tracks brought together for the first time, reworked and newly recorded by a selection of the jazz scene’s most exciting young talents today. Representing a bridge between the ground-breaking label’s past and future, the project features Brit Award-winning Jorja Smith, whose version of St Germain’s Rose Rouge is featured on the A side of this vinyl. The track, for which St Germain originally sampled Marlena Shaw’s Cookin With Blue Note At Montreaux album, takes its cues from classic soul, jazz and reggae and perfectly captures the enduringly relevant Blue Note aesthetic. Jorja is “Honoured to be involved on this Blue Note album to rework St Germain’s anthem Rose Rouge. And with such an array of wonderful musicians on the album, including my brothers Ezra Collective”. Alongside Smith’s reworking of Rose Rouge is Ezra Collective’s version of Wayne Shorter’s Footprints. “This project means so much to us in Ezra Collective. For us, Blue Note encapsulates everything that jazz is. Everchanging, evermoving with times and always swinging. From Herbie to Wayne, Glasper and Jose James. Across the decades it’s been a constant source of inspiration, so to contribute to that is a dream come true. Footprints was a song we learnt as teenagers, and a song we’ve haven’t left alone since. It felt the perfect opportunity to pay homage to a hero of ours, Wayne Shorter, as well as document the journey we’ve made as a band since then."