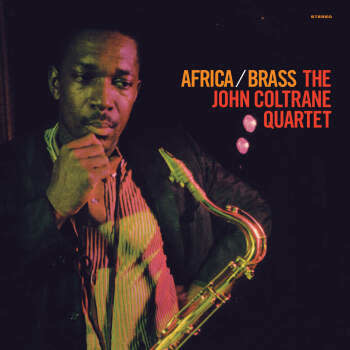 Orange vinyl. This 1961 Impulse album was particularly notable for Coltrane’s use of the expanded sound provided by a ‘big band’ with trumpets, trombone, baritone sax, Eric Dolphy’s bass clarinet and flute, and (most unusually) French horns, euphonium and tuba. Overlaying this backing is one of Coltrane’s great quartets with Messrs. Tyner (who, with Dolphy, did the arranging), Workman and Jones. The album’s centrepiece is the extended Coltrane composition, Africa. The tune’s luscious arrangement provides hints of Ellington, Gil Evans and even Charles Mingus in the brass harmonics and ensemble dynamism that Coltrane manages to coax from these players. Elsewhere, the other Coltrane original, Blues Minor, provides another trademark blast of tenor pyrotechnics from the man who hardly lets up for the tune’s seven-and-a-half minutes. By comparison, Coltrane’s version of Greensleeves is a relatively restrained affair, in effect, mimicking the man’s superlative version of My Favourite Things recorded the previous year, with its jaunty soprano sax theme, but given an added dimension with its ‘big band’ accompaniment. Finally, there’s Song Of The Underground, a traditional song recorded at the same session and included here as a bonus track.