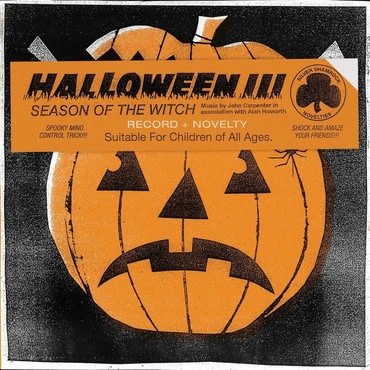 Death Waltz is delighted to revisit not only one of their favourite Halloween sequels, but one of their favourite sequels period. It's been a long, hard road for Halloween III: The Season of the Witch to be accepted within the Halloween franchise, but it is now widely considered to be one of the best horror movies of the ‘80s. The film is unique not only due to it lacking Michael Myers (save for a brief appearance on a TV screen) but also for its score. John Carpenter and Alan Howarth completely jettisoned their previous work and deliver nothing short of an electronic masterpiece. The lead track Chariots Of Pumpkins is an epic 4/4 beat-driven synth-banger that has regularly been played by DJs over the last 10 years. The rest of the score features lush pads, Linn drums aplenty and veers from beautiful blissed-out ambient drones to sinister stinger-driven mood pieces. Absolutely outstanding stuff.