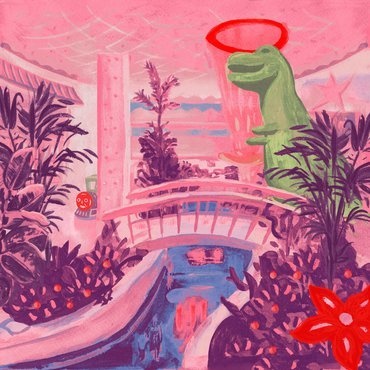 South east London songwriter and visual artist Jerkcurb releases his hotly-anticipated debut album Air Con Eden - via Handsome Dad Records. The culmination of several years of intense creative focus, Air Con Eden reflects on Jerkcurb instigator Jacob Read’s recent real life events, losses and tragedies as well as more cryptic, fictitious perspectives and surreal adopted personalities. There’s a near impossible richness to Read’s songwriting form on Air Con Eden, with its as-yet-unheard title track offering perhaps the clearest distillation of the record’s predominant theme: time at its malleable and fraught. Inspired by Victor Gruen - the pioneering designer of shopping malls in the United States - Read unpacks the idea of being trapped in an eternity that feels like an endless present tense, the passing of the seasons reduced to a standstill in a pristine shopping mall; a symbol of both stasis and comfort; an Eden without the possibility of an ending.