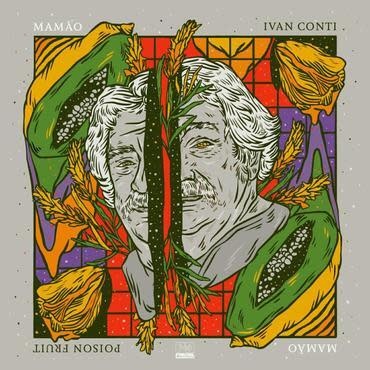 Splatter coloured vinyl and bonus 7" featuring a previously unreleased track from the original Poison Fruit sessions Katmandu, and Ninho, a track never before released on vinyl. From an artist in their seventies, you probably wouldn’t expect to hear an album like this. But Brazilian drumming legend Ivan ‘Mamao’ Conti has been experimenting and innovating for the last half a century. As one third of cult Rio jazz-funk trio Azymuth, Mamao was at the root of the group’s ‘samba doido’ (crazy samba) philosophy, which warped the traditional samba compass with jazz influences and space age electronics. Featuring Alex Malheiros and Kiko Continentino on a number of tracks, the Azymuth lifeblood runs deep, but venturing into the modern discotheque (as Mamao would call it), Poison Fruit also experiments with sounds more commonly associated with house and techno, with the help of London based producer Daniel Maunick (aka Dokta Venom) and Mamao’s son Thiago Maranhao. Take a bite of Mamao’s psychoactive Papaya and join the maestro on a weird and wonderful stroll through the Brazilian jungle.