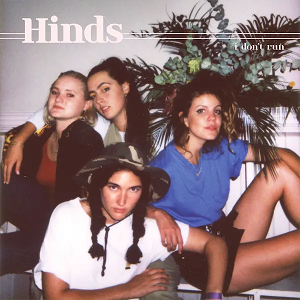 Spanish quartet Hinds' beloved second record I Don’t Run, originally released in 2018, is now avaialable as an extremely limited edition picturedisc for Love Record Stores. Following their acclaimed ramshackle lo-fi debut Leave Me Alone, their second album showcases a bigger, better, faster, funnier and more dexterous Hinds. Co-produced by the band and Gordon Raphael [The Strokes, Regina Spektor], and mixed by Shawn Everett [Alabama Shakes, Perfume Genius, The War On Drugs, John Legend], I Don’t Run is the product of a band fighting for their place, a band unwilling to rely upon past success, a band who had just begun to prove themselves, and a band who plays hard but works even harder.