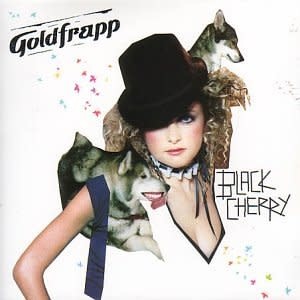 Purple vinyl. Originally released in April 2003, Goldfrapp's Black Cherry inhabits a dark alley, bristling with urban menace and throbbing with a deep electronic pulse - a far cry from their breezy debut, which gently led the listener to a fairytale aural utopia occupied by Parisian pop, whistling divas and baroque masters. Having given up the countryside for a neon-lit studio, Alison Goldfrapp and Will Gregory have infused Black Cherry with an intensity and brooding claustrophobia that's both exuberant and sensual. Simultaneously mellifluous and mechanical, tracks such as Train with its fiery industrial rhythm steer Goldfrapp dangerously close to the ailing electro-clash scene, before veering back to more familiar territory with the likes of the sultry, downbeat Black Cherry and languid dreamy ambience of Forever.