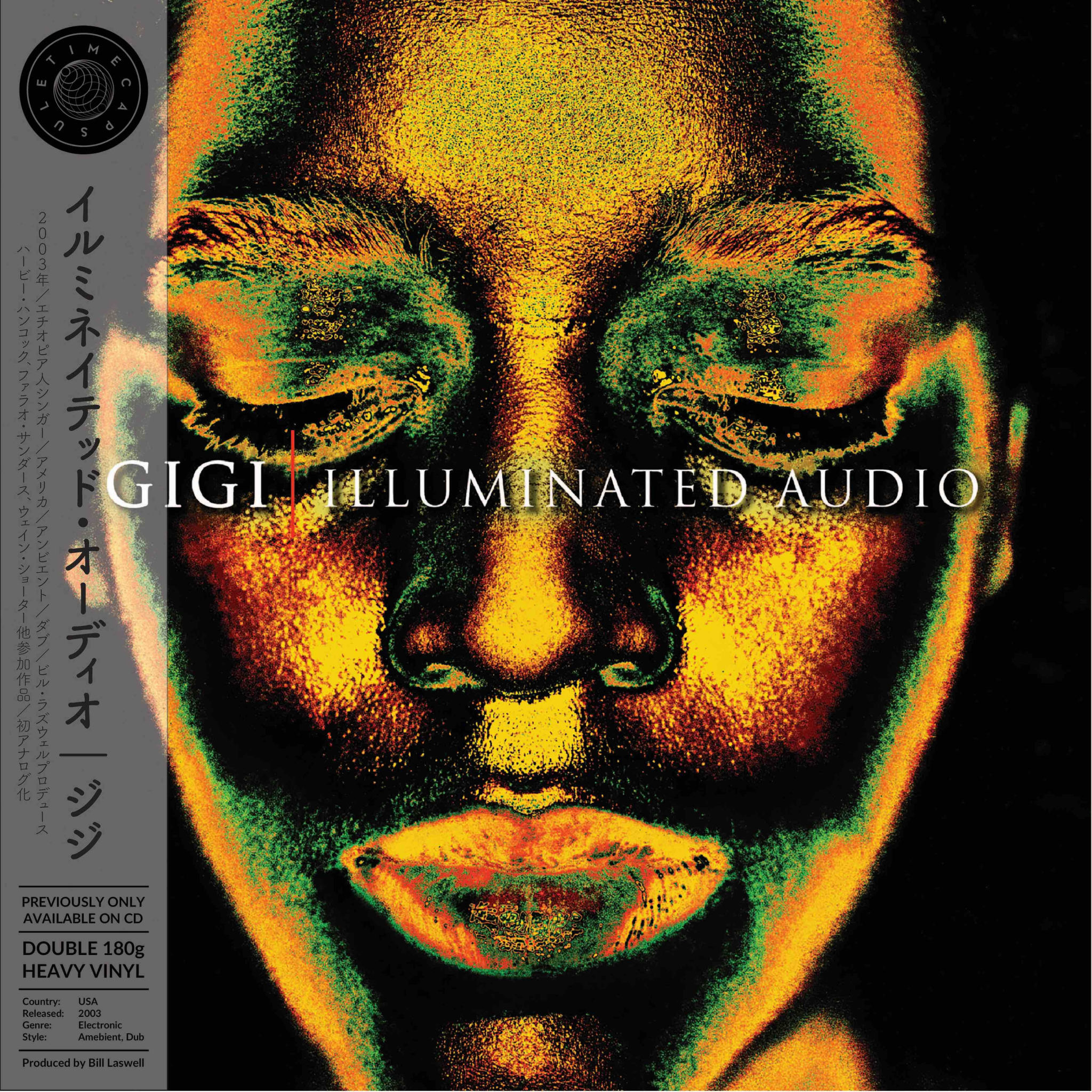 Following reissues of Japanese fusionist Yuji Toriyama and Italian new age visionary Il Guardiano Del Faro, the third Time Capsule is a body of dub reinterpretations by celebrated producer Bill Laswell of Ethiopian singer Gigi. Curated by Tokyo record collector, music researcher and seasoned reissue supervisor Ken Hidaka, it is the first time Illuminated Audio is pressed to vinyl after its CD release in 2003. Ejigayehu Shibabaw was born in 1974 in Chagni, northwestern Ethiopia and by pursuing a career as a singer, went against her father’s strict, traditional gender roles. As Gigi, she embraced the same musical freedom she had strived for in her personal life, incorporating the Ethiopian church, funk, hip-hop, West and South African music into her work. She first settled in Nairobi, then Addis Ababa, where she quickly established herself as one of the city’s leading singers. A move to San Francisco in 1998 led to a long and fruitful creative partnership with bassist and producer Bill Laswell. Around the same time, Chris Blackwell had stepped away from Island Records to start the art house film company and label Palm Pictures. He took an interest in Gigi and together with Laswell, pulled together an all-star cast of musicians for her self-titled US debut album, including Herbie Hancock, Pharoah Sanders and Wayne Shorter. It won international critical acclaim, not just for its musicianship but for making Gigi a “defining voice for the Ethiopian expatriate community”, as journalist Tyran Grillo praises in his Time Capsule liner notes. From the nation-defining 1896 victory over Italian invaders to the quiet revolutionaries who wear simple shemma garments, Grillo believes the themes in Gigi make it “a shower of sunlight on her homeland for those ignorant of its struggles.” After its success, Blackwell encouraged them to go back into the studio to rethink the album and Illuminated Audio was born. “Anyone can make a voice sound worldly”, Grillo remarks, “but rare are those who can make one sound inner-worldly.” Gigi was clear with Laswell to give her vocals a minor role “because it’s already been done.” Instead her Amharic verse is fleeting, exhaling through the textures like ghostly fragments; soaring yet muted. Yet the album is still titled under her name, an assertion by Laswell of her central role in the album’s creation. Not only was it a fully endorsed project by Gigi, but she would be present throughout its development, giving feedback on half-finished ideas as Laswell played them back in the studio. “It works perfectly”, she reflected after the album’s release. “We wanted to capture the whole spirit of each track, and Bill’s remixes create a different music language that really puts you in a pleasant place”. This new vocabulary takes its lead from a technical approach that Laswell had been perfecting during a furtive creative period at the turn of the millennium. Much like his ambient interpretations of Miles Davis (Panthalassa, 1998), Bob Marley (Dreams of Freedom, 1997), and Carlos Santana (Divine Light, 2001), Laswell approached Illuminated Audio by returning to the original multitrack masters. Gigi wasn’t just reworked, but recomposed into an expansive lattice of instruments, submerged in a watery ambience of dub and trance undercurrents. Sonically, this new language that Gigi refers to, is manifested by the original album’s more understated parts being pushed to the fore. Explaining his contrasting methods, Laswell saw Gigi as being “put together in a way that fits”. Contrastingly, in Illuminated Audio, “a lot of things that I featured in the remix weren’t as audible in the original.” Instrumentation laying near-dormant, deep in the mix, are brought to the fore: the acid rock guitar and Wayne Shorter’s saxophone on Tew Ante Sew, Graham Haynes’ flugelhorn on Nafekeñ, Laswell’s bass on Kahn, the melodica in Mengedegna or the floating synths and talking drums in Gud Fella. Brought to his attention by mentor DJ Nori, Hidaka describes Illuminated Audio as a “masterful sonic exploration into ethereal ambience and dub” and made sure this reissue also contained a full remaster to give its “deep musicality” much better dynamics and density in the overall sound. Hidaka admits that Laswell's music “is sometimes so out-there, it is often misunderstood” and, indeed, to dub album non-believers this might seem like a prolific producer imposing himself on another artist’s work; eternally developing rearrangements that never quite get to its destination. But that’s missing its true power and triumph. This is more than the reissue of a remix, but “a wholly unique musical entity”, as Hidaka describes. Illuminated Audio refers to the illuminated manuscripts that comprise the major part of Ethiopian art and its new compositions stand in proud solitude as a rare body of reworks that both informs and enhances their originals.