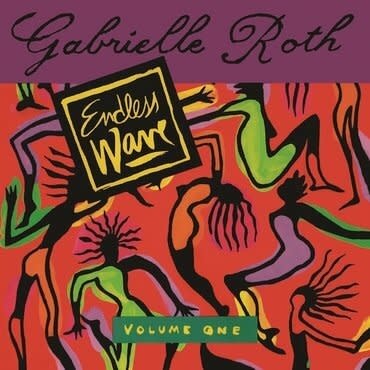 The 5Rhythms movement practice founder Gabrielle Roth’s dance meditation soundtrack from 1996. Previously only available on CD, first release on audiophile 45rpm double heavy-weight vinyl. Through direct encounters and training from the era’s noted psychologists, philosophers, anthropologists, and spiritual gurus, she single-handedly rediscovered and redefined the ancient shamanic technique of ecstatic dance, establishing a method she named 5Rhythms in the late 70’s. Endless Waves Volume One was originally released on their own private label in 1996 on CD. Comprised of a selection of their past recordings, the first part acts as a seductive entry point into their rhythmic sound world, with Roth’s voice intoning gentle instructions over each track. The opener Body Parts commences with a series of rolling polyrhythmic beats to prepare the body for meditation. From there the music shifts through a series of ambient moods that evoke each of the ‘5Rhythm’ states of being. Atmospheric synths and stately violins combine to help ease into movement on Flowing. Didgeridoos and funky bass lines evoke masculine energy on Staccato before the tumbling rhythms of Chaos encourage the uninhibited release of one’s mind and body. The soft vocal harmonies of Lyrical help the listener towards a lighter, more fluid, and creative state of being creating a becalming state that continues with the deep ritualistic chants and languid drums of Stillness. The second part of the album consists of a non-guided version of the same journey. Freshly recorded for the album’s release in 1996, the band deliver up an equally vital series of brilliantly realised rhythmic excursions.