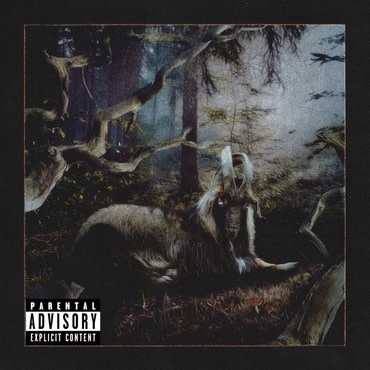 Single sided vinyl with an etched B-Side. Last year, around the time he released Some Rap Songs and ended his deal with Columbia Records, Thebe Kgositsile said he was looking forward to “doing riskier shit.” Apparently, that meant turning his already-insular music darker and more inscrutable. The rapper, better known as Earl Sweatshirt, doesn’t offer much direct commentary on Feet of Clay. Instead, he pushes further into the murky territory he began mapping on Some Rap Songs, loosening up his flow, letting down his guard, and wandering ever-further into the recesses of his mind. Kgositsile has described Feet of Clay, his latest seven-track, 15-minute project, as “a collection of observations and feelings recorded during the death throes of a crumbling empire.” The title references the Bible’s Book of Daniel: in it, the prophet interprets a dream of Babylonian King Nebuchadnezzar, in which he sees a colossal statue made of four metals: a head of gold, arms and chest of silver, body and thighs of brass, and feet of iron and clay. Daniel tells Nebuchadnezzar the statue represents the kingdoms of the Earth, starting with Babylon, and that a stone cut by non-human hands will fall on the statue’s feet and destroy it, a metaphor for the end times. “We at the feet of clay right now,” Kgositsile told Apple Music. “We posted up live from burning Rome.” His verses don’t give much clarity to that ambitious context so much as they offer fragments: “I beat you to the point/My noose is golden/True and livin,’ lonesome/Pugilistic moments/Riveting, come get to know me at my innermost/My family business anguish, now I need atonement,” he raps on OD. The line hints at Kgositsile’s grief over his father, who passed in 2018. This is the project he made in the wake of that loss. The pall of death haunts the edges of his rhymes; birds of prey circle carrion on 74, and on OD he raps, “My memory really leaking blood/It’s congealing, stuck.” If these are confessions, they are delivered in code, and the meaning comes from the sounds of the words themselves.