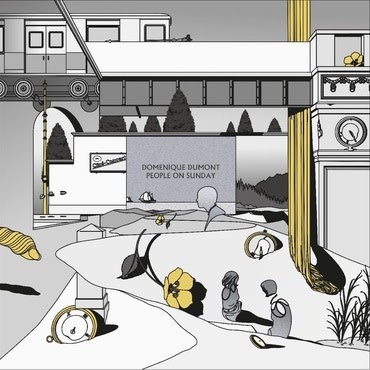 People On Sunday is an original soundtrack to the 1930 silent film variously known as Menschen am Sonntag, Les Hommes le Dimanche and People On Sunday. The film is a key work of interwar German cinema, based on a screenplay by Billy Wilder. Like Domenique Dumont’s earlier albums, Comme Ça and Miniatures De Auto Rhythm, People On Sunday evokes a more innocent, carefree time conjured by wistful electronics full of warmth and melody. Touching on the hazy exotica that made those two records so alluring, here Dumont draws on his love of classical music, library music and early electronic experimentation to create a timeless, optimistic sound. If his past productions possessed a certain Mediterranean quality, across these 13 new pieces Dumont’s shimmering synth-pop has an enchanting simplicity. Part documentary, part fiction, the film People On Sunday follows a group of characters going about their business in Weimar-era Berlin over one weekend and shows normal life in Germany before dictatorship. People On Sunday is the third album by Domenique Dumont. Freshly signed to The Leaf Label, having previously released two albums on Parisian electronic / dance label Antinote.