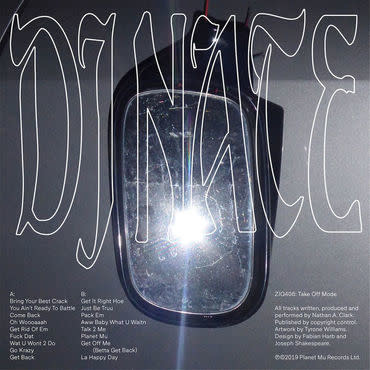 In an unexpected turn of events Planet Mu welcomes back DJ Nate for a new album Take Off Mode, a full nine years after his debut album Da Trak Genious was released on the label. A quick update: DJ Nate is from the West Side of Chicago and was the label's first ever footwork signing back in 2010, when Myspace was still a place to contact artists. His strange, maximalist, trippy and sample-heavy sound was the acid test to introduce footwork to a wider audience, outside Chicago and certain aficianados, and it created the opportunity for Planet Mu to release the two Bangs and Works compilations and numerous albums and singles from the genre, introducing the world to such artists as DJ Rashad, Jlin and Traxman. In the decade since Da Trak Genious was released, DJ Nate has been a popular R&B and Hip Hop producer and performer with a strong local following. The highlight of this part of his career was Gucci Goggles which was an underground hit outside Chicago. His rise was slowed after he was paralysed from the neck down two years ago, an accident which he's recently recovered from. As well as his R&B, Nate has still been making the occasional footwork track, often putting videos out on youtube, and it's these tracks, uploaded between 2010 to now, which caught our ear. This selection of tracks feels like they're in direct continuity with his debut,perhaps not quite as chaotic as certain moments of Da Trak Genious, but still with his trademark yearning vocal samples, cutting them into strange new pitched up and down musical motifs, his shout outs and rough beats intact.