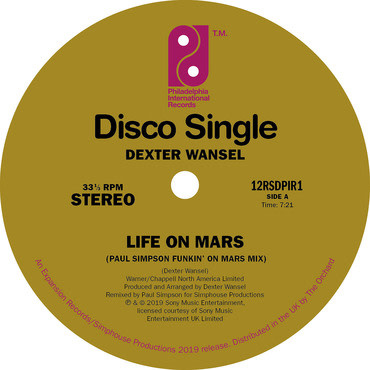 1000 hand numbered copies only. Few jazz funk classics have been as iconic as Life On Mars by keyboard legend, songwriter, producer and architect of the ‘Philly Sound’ Dexter Wansel. First released in 1976 it became an immediate fixture on the dance floor and remains an evergreen to this day with a generation of disco, soul and jazz funkateers. Now comes an extremely special exclusive release for Record Store Day. This is the first ever remix of the track, all parts taken from the original masters tapes and added to courtesy of remixer Paul Simpson (Paul Simpson Connection, Serious Intention, Adeva etc). Dexter Wansel himself contributes on an exclusive extended mix of Theme From The Planets which includes an extra monologue section with the man himself telling the story of these tracks. This 12” released on original Philadelphia International Records label artwork through Expansion.