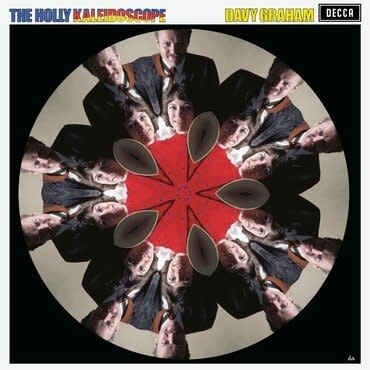 Davy Graham was one of the leading pioneers of the acoustic guitar who invented and developed many techniques for the instrument including chord progressions and open tunings (most famously for DADGAD). He also inspired many leading musicians including Bert Jansch, Martin Carthy, John Martyn, Paul Simon and Jimmy Page. The Holly Kaleidoscope was Graham’s final LP for Decca and he was accompanied by his then wife, American singer Holly Gwyn, who sang vocals on a few of the tracks. The fourteen tracks on the LP contains five Graham originals plus a mixture of rearranged popular songs. This RSD 2020 LP reissue comes with additional liner notes and rare photos on the LP inner bag. Pure analogue remastered directly from the original tapes and pressed on "Kaleidoscope / paddled“ effect coloured vinyl. First time reissue on LP since the original release in 1970, 50 years ago.