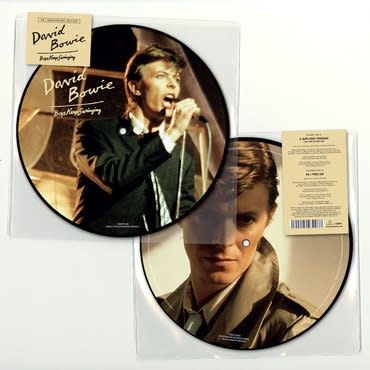 2019 is the 40th anniversary of Lodger and first comes the latest limited 7" picture disc from Parlophone, Boys Keep Swinging. While originally recording the song, Bowie had hoped to capture a garage band feel with the musicians swapping instruments after a deck of Brian Eno’s Oblique Strategies cards had suggested ‘reverse roles’. So guitarist Carlos Alomar played drums and drummer Dennis Davis played bass. The version featured on the A side is the 2017 mix by Tony Visconti from Lodger, undertaken for the A New Career In A New Town box set, as both Tony and Bowie felt they never had the opportunity to give Lodger the mix it deserved in 1979, due to time and studio constraints. The AA side features I Pray, Ole which was apparently recorded during the Lodger sessions, but remained unreleased until mixed by David and David Richards for inclusion as an extra track on the 1991 reissue of the Lodger album. The track has been commercially unavailable since then.