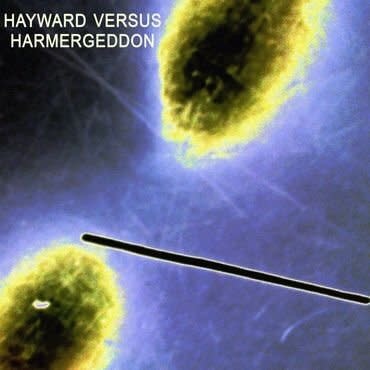 Magical new collaboration between Charles and London based audio visual duo Harmergeddon. Driving drumming with electronics weaving through beautiful soundscapes. Charles Hayward is an English drummer and was a founding member of the experimental rock groups This Heat and Camberwell Now. He also played with Mal Dean's Amazing Band, Dolphin Logic, and gigged and recorded with Phil Manzanera in the group Quiet Sun project as well as a short stint with Gong. He was a session musician on The Raincoats' second album, Odyshape, and on one occasion played drums for the anarchist punk band Crass. Since the late 1980s he has concentrated on solo projects and collaborations, including Massacre with Bill Laswell and Fred Frith. His first solo record, Survive the Gesture, was released in 1987. Since then, he has released 10 more long players, and has been touring with the reformed This is not This Heat. Harmergeddon is Nathan Greywater and Polyphoniefae, Dungeness based a/v performance art duo formed in South London in the autumn of 2010.Their live show blends sound and light in a feedback loop using photophonics (sound carried on light beams), electro magnetic fields and consumer electronic junk, taking Industrial from its scrap metal past to the electronic fallout of late capitalism with a basis in improvisation and psychedelia. The result verges on sensory overload.