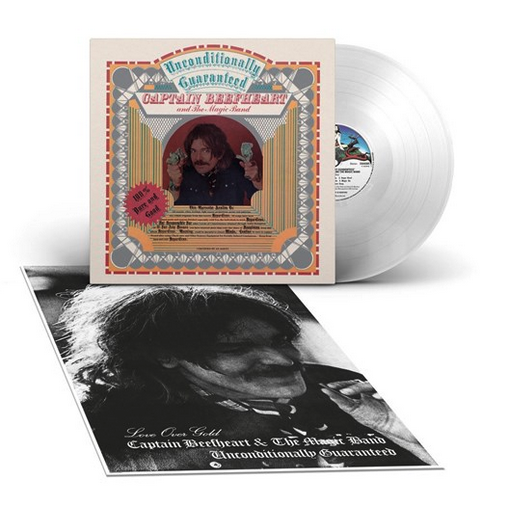 Universally recognized as being the works of a true maverick genius, the canon of recordings by the late, great Captain Beefheart aka Don Van Vliet – often ably assisted by his Magic Band – rank amongst the most important and influential rock music ever created and continue to inform and influence musicians to this day whilst also garnering a following of new, young musically adventurous rock fans along the way.

Within these works the 1974 album “Unconditionally Guaranteed” is a true hidden gem which has been rightfully elevated to cult status over the years since its first appearance.

Originally released by Virgin Records in the UK (and Mercury Records in the USA) “Unconditionally Guaranteed” represents a fascinating pivot point within Beefheart’s recordings.

Known as he was for his more oblique amalgams of delta blues, avant-garde jazz and rock on albums such as “Trout Mask Replica” and “Clear Spot”, “Unconditionally Guaranteed” captures a musical moment when Beefheart deviates from that path and embarks on an exploration of more melodic soundscapes into which he continues to contribute his uniquely poetic lyrics delivered via his instantly recognizable vocals.