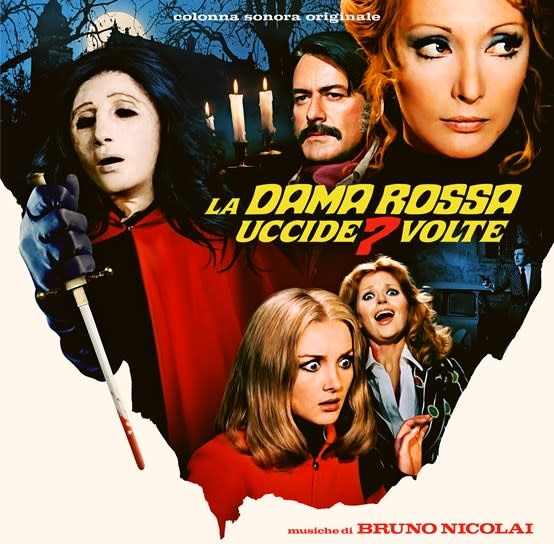 "LA DAMA ROSSA UCCIDE SETTE VOLTE—The Red Queen Kills Seven Times—blurs the line between thriller and horror. The cult success it enjoys can be attributed to its aesthetics that encapsulate the essence of the Italian thriller. Bruno Nicolai’s score for The Red Queen Kills Seven Times flawlessly brings together the pop and underground music sensitivity of the 1970s with the gothic nuances of the plot thanks to a clever use of harpsichords. The result is a pivotal score, not just because of the importance of the film itself, but for the whole golden age of the soundtrack genre. Exquisite, sweet and sensual lounge tracks are counterbalanced by tense, deranged and suspense-filled dodecaphonic highlights and by obstinate bass lines that become the perfect soundtrack for the Red Queen’s murders or the victims’ desperate getaways. The album is part of CAM Sugar’s PAURA, a series of standalone soundtrack releases that follow the same-titled compilation which explores rare and unreleased horror gems from the label archive. This new limited 50th anniversary blood-red vinyl edition of this cult, sought-after soundtrack—a masterpiece of Italian Giallo cinema—is fully remastered from original tapes, includes two bonus tracks and is destined to become a staple for the collectors of the genre and for the fans of the golden age of Italian and horror cinema, making it an essential release of Record Store Day 2022.
"